How much does "Science" really know?

I just read this article about how scientists have determined that our Milky Way is about twice as big as they previously thought it was. Well that's certainly very interesting news, but it again has me wondering how much "Science" really knows.

The study of the various types of sciences has become extremely popular these days, and the Internet and TV have science easily accessible to anyone whether they study science or not.  I try to keep informed with various scientific understandings and discoveries, and much of the news and videos I watch tend to state things very matter of factly.  I often hear that "Science says this..." or "Science says that..." as if it "Science" was this all knowing deity that is never wrong.

And I think that's what bothers me about it.  I feel like too many people are just blindly accepting things that "Science" supposedly says is true as an immutable fact.  In most cases it may very well be a fact, but there are other times when the alleged "facts" fall apart.

This post isn't about the size of the Milky Way. That's just the latest thing that has me questioning how much "Science" really knows about our reality.  It's been my observation that many people have emotional attachments to various beliefs based on scientific teachings that they don't want to let go of.  If something contradicts what they have determined to be true, they will try to find a way to refute it and look for evidence that supports the view they already have (not in all cases, just sometimes).  Evolution or the Big Bang Theory could be examples. They may not want to believe in any sort of supreme deity, but they will support the Big Bang Theory as if it is an absolute fact. A theory that essentially suggests the universe exploded into existence out of nothing.  How can you really know though?  I can understand if you don't want to believe the universe was created by a deity, but isn't it ok to just say you don't know for sure?  With Evolution, if something doesn't fit into the established timeline for a fossil or artifact, they may just try to adjust it so that it does fit with what is established.  Isn't it okay to consider the possibility that the established timeline isn't correct? Maybe the timeline itself should be adjusted? I realize that new discoveries sometimes do change what was previously thought to be true (like the size of the Milky Way), but there are other times when new opinions on a subject are met with hostility (see Ben Stein's film Expelled for examples).

Sometimes science gets politicized, like with "climate change" (formerly known as "global warming," but because that mantra didn't work out to well, they decided to just basically include every kind of weather event).  It's no secret that climate does change, but the issue is that do carbon emissions actually cause climate to change?  I grew up thinking that.  It's what I was taught.  But then I found out not everyone thought that carbon emissions caused "global warming" despite the fact that we continue to be told there is a consensus.  I do not see an actual consensus, only those people who think that carbon emissions are a real problem (and their media lackeys) claiming there is a consensus. In my opinion, the evidence suggests carbon emissions have little or nothing to do with climate change. My opinion is based on what scientists who disagree with the alleged "consensus" on the subject have said, as well as predictions (and fear mongering) about the present day that were made many years ago that did not turn out to be accurate.  It's also based on questionable material put out by people in the "consensus" community such as the Climategate emails.  And the fact that there are those who want to tax and profit from the "consensus" that make it even more questionable to me.  Cui Bono?

I really don't mean to disparage the study of science.  What I've said so far might make it sound that way, but seriously, I don't mean to disparage the study of science. I think it's great and is responsible for many amazing things that has made the modern world what it is. Scientists have made incredible medical advances and traveled to the moon and have sent probes much farther into space.  But, you know, it's not always right about everything (or at least the interpretation of the data isn't always right).  And we shouldn't blindly accept everything we are told because "Science" supposedly says it is true.  We might think the galaxy is one size, only to later find out it is actually another size.  But I doubt many people have an emotional attachment or political reason to believe the galaxy is one size or another, so there isn't much of a reason to question it.  That makes it easier to change what was previously thought to be true into a new truth.

For me, when I read science news, I consider what I've read and make note of it.  I generally assume that it is very likely what I have read is true, but I also consider the possibility it is inaccurate for whatever reason.  I may not know the reason, and there may not be any pertinent reason for me to even question it, but I'd rather be able to stay open to the possibility of eventually coming to a new understanding than determined to cling to an old, possibly inaccurate understanding. So I do not keep any emotional attachments to my understanding of scientific subjects. I may hold a certain view about a certain topic, but ultimately I'm content in saying I don't know the answer for sure. I don't think excessive carbon emissions cause climate change, but that doesn't mean I couldn't be convinced of that again if someone were able to present me with better evidence.

I have my opinions, but I'm open minded and if I don't know something for sure, I'm comfortable in saying so.  Because, you know, you just never know when you're going to find out when the galaxy is bigger than you thought it was. 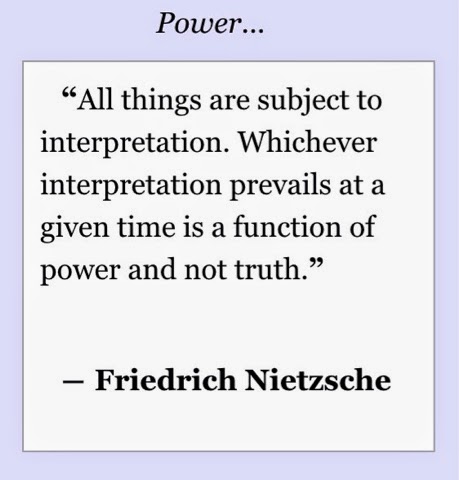 Maybe Nietzsche was right? Does this quote still apply today?  I think it probably does.
Posted by Guvna at 3:05 PM

Email ThisBlogThis!Share to TwitterShare to FacebookShare to Pinterest
Labels: science

Guvna
Blogger. Philosopher. Photographer. Artist. Internet culture guru. I am a researcher of history, religion, and the paranormal. Particular topics of interest to me include Christianity, philosophy, spirituality, unexplained phenomena, mysteries, ancient anomalies, conspiracy theory, UFOs, Roman history, Egyptian history, World War II history, and history's mysteries. I love to travel and see famous and historic places. I have several blogs I maintain including Histories, Mysteries, and Strangeness that covers the topics mentioned above, and several "Web of" sites that include topics such as humor, good news, and more.